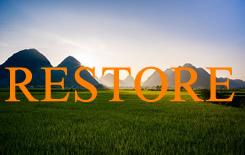 God created man for fellowship with man. That was evident in the Garden of Eden, as the presence of the Lord God, would visit man. (Genesis 3:8) It was also evident that once man sinned, the fellowship was broken and man was hiding from the presence and fellowship of his Creator. It was not God who pushed man away, it was man who was no longer comfortable in God’s presence. (Genesis 3:10.) Sin broke both the relationship and the fellowship that God and man had been mutually enjoying.

God immediately began a process that pointed to the sending of His only begotten Son, the Lord Jesus Christ, with restoration of fellowship as the objective.

The scripture tells that that to as many as receive the Lord Jesus, He gives power to become sons of God. (John 1:12) Giving those who receive Him the status or relationship of sons, define the kind of fellowship that God desires with mankind – the fellowship of a Father with His sons. Because sin had separated man from God, a restoration of fellowship with God, meant dealing with the sin problem. That is what the Lord Jesus did in His death, the shedding of His blood and in His resurrection from the dead. However, because even after restoration, the possibility exists that man may still sin, God had to put in place the means of dealing with any further sin.

The children of God is therefore taught by the Word of God that, “if any man sin, we have an advocate with the Father, Jesus Christ, the righteous:” (1 John 2:1) The word, “advocate” which suggest a role of a legal representative means that there exists a legal system before God for dealing with sin. We are told that our response to sin in our lives should be “if we confess our sins, He is faithful and just to forgive us our sins, and to cleanse us from all unrighteousness.” (1 John 1:9)

The lesson to be learnt from all this is: 1. God desires the fellowship of man 2. Sin can interrupt and hinder that fellowship and 3. Once sin occurs, the immediate priority should be restoration of that fellowship, broken by sin.

According to the Word of God, the same is true when men sin against men.  The first approach should be to “go and tell him his fault, between you and him alone” (Matthew 18:15). It says, if he takes responsibility for his failings, you have gained your brother.  Restoration would have occurred. Again the message is that when sin stands between fellowship, the immediate and first objective is restoration. Whether it is man sinning against God or against man, we also note that God holds man responsible to activate the restorative process, that is, man is to confess his sin or man is to go to the offending brother.

The Word of God recognises that a man can be so overtaken by sin, that help is required in the restoration of fellowship.  Galatians 6:1 points to a case in which a brother is overtaken in a fault. The scripture then commands those who are spiritual to restore such a person. Again, the first objective when sin occurs is restoration. Galatians 6:1 shows however that in the sin business we are also responsible for each other. We need to help persons to overcome and to maintain fellowship with God and the brethren.

That scripture points to the possibility that a person may be unable on his own, to restore himself. Clearly, the person's failing is also known to others. "Overtaken" suggests a submission to weakness. The person has been overtaken or overcome by sin. We should be rushing to restore. It also tells us that in restoring someone our attitude should be one of meekness being mindful of the possibilities of our own failings. None of us is immune from the possibility of sin.

The church has been given authority through the power of the Lord Jesus Christ to exercise chastening and discipline concerning sin among its membership. (See 1 Corinthians 5: 2-5)

Given that the first objective is ALWAYS restoration, the exercise of chastening and judgement is understood to only be a resort when there is an unwillingness of the person to repent.

In 2 Corinthians 2:6 someone was under a chastening. Paul described it as a “punishment which was inflicted of many” It was another way of saying that many in the church had inflicted the punishment. It would have been a chastening that the church had exercised on one of its own. The punishment had clearly served its purpose. Paul wrote telling the church that if it continues its chastening, there is a danger that “such a one should be swallowed up (consumed, destroyed) with overmuch sorrow”. (vs 7)

They are therefore to forgive and comfort the person. Forgive therefore in this sense means no longer hold the sin against the person. This is not about personal forgiveness. It is about releasing the person from the punishment now that they have paid the price and have repented.

In addition to using the words "forgive" and "comfort" he adds "confirm your love towards him". Once the punishment has served its purpose there should be forgiveness, comfort and love. The person should be made to know that they are forgiven and loved.

So serious was the matter, that Paul tied any willingness to forgive, comfort and love the person who had been punished as proof as to whether they were obedient in all things. To put it another way, any unwillingness to forgive, comfort, love and fully restore fellowship to such a person would have called the obedience of that church into question. It well now mean that they were in disobedience, and in such a case had their own sin problem.

But the 11th verse highlights even more the seriousness of the matter. Paul wrote that Satan can take advantage of such a situation. There is therefore a line between the legitimate exercise of the authority given to the church to exercise discipline on a member that sin and the recognition of the moment when that person is to be forgiven, restored into fellowship and the punishment lifted.

If at any time when the punishment should end, it continues,  a door is opened through which Satan  can enter.  The act of forgiveness and restoration should be as clear and defined to all, as was the decision to punish.

Once the person has repented, forgiveness and restoration to fellowship is not an option. It is a command of the Lord.