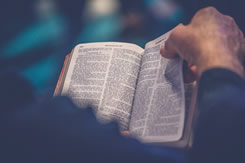 The office or gift of the Pastor is listed among the gifts (often called the ministry gifts) in Ephesians 4:11. According to the scripture, those gifts are given by the Lord. Let us focus on the office of the pastor. It is the Lord who distributes these gifts as He sees fit. No man can choose to be a pastor. One cannot be a pastor by his personal choice. Doubtless there are many who are performing the role of the pastor, without the calling and, may be recognized by others as a pastor, simply on the basis that they preside over a church. But according to the scripture, presiding over a church is NOT what makes one a pastor. The callings of God are NEVER chosen by men. According to Hebrews 5:4, No man taketh this honour unto himself, but he that is called of God.

The scripture also says that the good works for which we are created in Christ Jesus were determined for us "before". (Eph 2:10). In Gal 1:15, 16 Paul states that it did please God who "separated me from my mother's womb and called me by His grace" to reveal His Son in him. This scripture implies that before he came out of his mother’s womb, his purpose was determined and that God brought him from his mother's womb for that predetermined purpose.  In other words, a person is a pastor before he is even set over a church. He is set by God over a church because he is a pastor. He is a pastor before he had knowledge of it and certainly before he had a single member. The number of members over which one presides cannot be a basis to determining the call. Even having many members do not prove the call.

In one parable, the shepherd left 99 in search of one sheep that was lost. (Luke 15:4) A pastor is no less a pastor with one sheep than he is with 100. He is not more of a pastor with 100 sheep than he is with one sheep. It must therefore be an oversight of the scripture and a misunderstanding of the spiritual definition of a pastor, to assess pastors based on the number of persons in their churches. It is also a major point of discouragement used by Satan upon pastors with few members. Believers must ensure that they are not a part of that discouragement.

Some may argue that numbers speak of effectiveness. In other words, whether the person is effective in his fulfilment of the call. Again, what is the scriptural basis for this thinking? It is purely human thinking and based on an assumption that you have an understanding of the call of God upon another person. In the parable of the talents, one individual was given 5, another 2 and another 1. All did NOT have the same degree of responsibility or oversight and the expected returns were different as well. But there was one man who hid his talent and had nothing to show. However, that is determined by the Lord on the day of reckoning. (Matthew 25:19) We cannot be the judge of another man's servant. No one is sufficiently au courant with the call of God upon another so as to judge his effectiveness. However, we are to judge ourselves, to the extent that we can. Can the failures of men be responsible for their numbers in some instances?

Very possible! But only God can judge that. That would be revealed on the day of His judgement "and then shall everyman have praise of God". (1 Corinthians 4:5) You may well find, on that day, that some regarded by men as failures, were successes and some regarded as successes, had failed. And some thought of to be failures were indeed failures but not for the reasons that men thought - not because of the numbers of their "followers".

Entire cities and villages have different responses to the gospel. "A village of the Samaritans" "did not receive Him". The ministry of the Lord Jesus Christ was rejected by an entire village. What would have been the prospect of a "church" being formed there at that time? Was that rejection to be blamed on the Lord? Did He fail?

In Mark 6:1-6, in "His own country" He could do no mighty works and marveled because of their unbelief. In both instances, the rejection was based on beliefs that the entire village and country had entrenched in their thoughts. Was the Lord to blame for the small numbers of followers in those places? In Mark 6:11, the Lord alludes to the fact that an entire city can reject the gospel, telling His disciples to shake off the dust under your feet for your testimony against them (We must note that results differ from one location to another and results are not therefore a reflection of pastoral effectiveness.) and that it shall be more tolerable for Sodom and Gomorrah in the day of judgement than for that city. The words, “for a testimony against them” is noteworthy. There are people to whom the word of God is sent for a witness against them. (In the absence of such knowledge, how can we judge, another man’s servant?) God knew the people would be hostile to Jeremiah but had His purpose for sending him. What about Noah? God knew it would only be Noah and his family. (Small numbers). The Pastor’s family is important.

We must also note, when Paul handed over the Ephesian church to new pastors, those members were inherited and therefore, those numbers were not to be credited to their success. (Acts 20:25, 28,31) (See John 4:37, 38)

Paul also warned that after his departure, from among themselves, "shall men arise, speaking perverse things to draw away disciples after themselves. It is also true that the numbers of some were ravaged and stolen from others. Are these credited as successes to the beneficiary? A phenomenon of the last days is people following teachers who would tell them what they want to hear, rather than sound doctrine. (2 Timothy 4:3) These false teachers may have large followings. Should these be considered successes because their numbers may be impressive? (One must be wary about judging the Lord’s servants on the basis of the outward show of numbers). Suggestions that a pastor can be fired based on numbers give membership that is inclined to be manipulative, power over the pastor as they can bring him down by leaving and encouraging others to do so, for their own purposes. It also can cause pastors to compromise on preaching the whole counsel of God for fear of losing members. Administrators should regard any decision that brings fear upon pastors as inspired by the devil. On what basis is the minimum number derived in judging God’s servant? Once scriptures cannot be found to support such, it would therefore be the work of men and/or the devil. Is there scriptural reasons for firing a pastor? Yes, but definitely not on the basis of numbers.