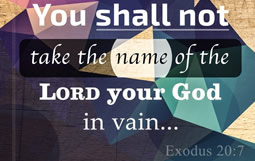 Very early in God’s dealing with man, He warns man against using His Name in vain.  Much of the use of the Name of the Lord by man occurs in human speech.
When the Lord taught His disciples to pray, in what is a model prayer (after this manner pray ye), He began by addressing the Father and then worshipping Him through His Name – Hallowed be Thy Name. (Matthew 6:9)

The Lord began by reverencing the Name of our Father in Heaven. He taught his disciples to speak words to the Father, letting Him know that His Name is Hallowed to them. Hallowed means holy, sanctified, set apart.

Such reverencing of the Name of God is the very opposite of the vain use of His Name, in which the Name of the Lord is treated as a common word or a mere human name.  In fact, many persons when vainly using the Name of the Lord are unaware at those moments that they are misusing His Name.  There is often no thought of Him, when His Name is vainly used as though it was a slang. An understanding of the Scripture would teach us that when God uses names, that is - even when He gives names to men, those names are always related to the character, call and purpose of the individual.  It is always about who the person is. God changed the name of Abram to Abraham – meaning father of a multitude – because that was whom God made him.  Most human names given by parents are in no way reflective of the person who owns the name, because our parents do not know us sufficiently to identify us by who we really are.

We see instances in the scripture where God told parents just how they should name their children. “But the angel said unto him, Fear not, Zacharias: for thy prayer is heard; and thy wife Elisabeth shall bear thee a son, and thou shalt call his name John.” (Luke 1:13)

“And she shall bring forth a son, and thou shalt call his name JESUS: for he shall save his people from their sins.” Even then, as other scriptures would show, Mary His mother did not know who he really was and continued to learn about Him as events occurred.

It maybe that the church needs to be reminded more often concerning the use of the Name of the Lord with particular emphasis on the dangers of using His Name in vain.

Parents have a responsibility to teach their children about the reverential use of the Name of the Lord. Too often, believers, using the language of the day would use the Name of the Lord in slangs and in a manner unrelated to how He intends that His Name be used.

We need to be mindful that the Name of the Lord is Holy. Part of the revelation of God to men is through the names that He has called himself.  His Name is Who He Is and exactly Whom He Is.  The Name God is so unique to God that only He is God, in the sense that He is. The word “god” is also used in other contexts so, as an example, Satan is referred to as the god of this world. (2 Corinthians 4:4)  Yet when people use the Name of God in vain, they are ALWAYS referring to God, but vainly.  So it is not just the use of the word in speech, but who is being referenced.

We should also be mindful that Satan influences human speech.  The scripture “death and life is in the power of the tongue” is well known and often quoted. Life came from God.  The Lord Jesus said that He came that we might have life and have it more abundantly.  The Lord therefore would want us to use our tongues to speak life.  He also said, that the devil’s purpose is to steal, kill and destroy.  It also means that it is in Satan’s interest to have people use their tongue to give place to him so that he can steal, kill and destroy.  A lot of ministering has been done in this area over the years.

Yet, missing, seems to be the fact that wrong speech is not just people speaking badly or in ignorance but that the devil influences human speech.  He could well be involved in the popularity of certain slangs that vainly uses the Name of the Lord.  It is nothing short of amazing how the “Oh my God” (OMG) slang has been internationalized and widely used.  It should not be regarded as coincidence, but Satanic influence.

This even applies to the use of His Name in music that does not glorify Him and in well intended and often otherwise enjoyable Christian comedy shows.