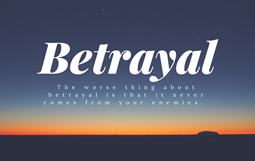 While there is truth to what is often said that “all sin is sin”, there are those that seem to be more grievous and devastating in their effects than others.  Betrayal must be ranked high among the most grievous of evils, if only for the pain that it leaves in its wake.  That, doubtless makes it one of the chief weapons of Satan as he sets up humans to hurt each other.  More so, as we would note as we examine the matter of betrayal, by its very nature it has to be carried out by someone close and trusted which is exactly why it causes such pain.  It is often accompanied by shock and surprise.

Rather than look for a dictionary and an intellectual definition of betrayal, we would examine its characteristics and nature which, hopefully, would allow self-examination and introspection, in the process so as to ensure it is recognised and rejected by those who would wish not to fall into the category of traitors.

Judas Iscariot, the one who betrayed the Lord Jesus Christ, has for over 2000 years stood as the symbol of betrayal.  An examination of the traits, thinking and behaviour of Judas would serve as enlightening in forming a concept of this sin.

Matthew 26:14-16 give an insight into the plot: “Then one of the twelve, called Judas Iscariot, went unto the chief priests and said unto them, What will ye give me, and I will deliver him unto you? And they covenanted with him for thirty pieces of silver. And from that time he sought opportunity to betray him.”

These evil religious men knew it would be best carried out with assistance from an insider, someone who was so close that he had knowledge of the Lord’s circumstances, surroundings, whereabouts, etc.  It is what is often referred to today as “an inside job.”  Those events that are usually referred to as “an inside job” are almost always acts of betrayal and carried out by traitors to the person or system that falls victim.  An inside job is almost always, in today’s world, a criminal act.  As secure as men attempt to make things or systems, there is almost no security that can stop an insider.  Traitors are always after selfish gain.

While Matthew’s writing revealed the thoughts and actions of Judas, John gives an insight of the spiritual.  “And supper being ended, the devil having now put into the heart of Judas Iscariot, Simon's son, to betray him” (John 13:2)

In other words, beyond Judas and his selfishness, was the devil.  The devil uses human selfishness.  The devil had, probably for the years that Judas walked with Christ been using him to thief money with which he was entrusted.  While to the spiritually short-sighted, Judas Iscariot, it appeared as gain, he was in fact, giving place to the devil and with every act was being weakened and overcome by Satan and prepared for this moment when he would no longer be able to resist.  It is no wonder, that even though he was identified by the Lord, before all the disciples as the betrayer, he left the room to carry out the betrayal.  He was by then given over to Satan. John wrote, “And after the sop Satan entered into him”. (John 13:27)

Satan is the spirit behind betrayals that are carried out by persons. (We must be very alert to guard ourselves against this process.) Mark, in documenting the Lord’s discourse concerning His Coming wrote: “Now the brother shall betray the brother to death, and the father the son; and children shall rise up against their parents, and shall cause them to be put to death.” (Mark 13:12) Betrayals are never acts of love. It is associated with hatred.  It walks hand in hand with hatred. That betrayal is so contrary to love, is what makes it so high within the ranks of sin.

However, it also shows why, when confronted with such hatred as betrayal, the Lord introduced the new commandment – that those who would follow Him, love one another as He loved them.

Those who would practice and walk in that kind of love CANNOT betray and is protected in their responses to the hurts of betrayal.  We need to keep in mind that from the devil’s point of view the intent of betrayals is to destroy both the traitor and the victim. Walking in the kind of love commanded by Our Lord, protects the victims and NO ONE while walking in that love can betray.

The Lord’s mention of this as a part of the signs preceding His Coming may well indicate something that may be quite common among brethren and of course, it is a warning for ALL concerning the danger it poses to one’s salvation.  2 Timothy 3:1, says “perilous times shall come.”  It goes on to say, “for men shall be lovers of themselves” a reference to selfishness.    Not to be left out from the list of evil characteristics is “traitors”.  Traitors are not scarce in the last days. (Note, that we must be careful neither to be a traitor nor to be led by a traitor.)

With the stigma attached to being a betrayer ever since Judas, a number of traitors do not see themselves as traitors, notwithstanding the presence of all the traits of Judas – acts of treachery that can only be carried out by an “insider” that is, one that is in a position of privilege and trust; one who for selfish gains is willing to sacrifice anything of value, including people. (The gains though often money, at its bottom-line is NOT limited to money.)

The betrayal is often justified in a manner that sounds intelligent to others who are asked to follow.  It often is framed as though the traitor is acting in the best interest of others.  Many have lost their life’s savings from traitors who like Judas were thieves that appeared to be concerned about the poor.

Many pastors have lost churches or had their membership divided by persons described by Paul as “grievous wolves…not sparing the flock” (Acts 20:29) Paul said these men were “insiders”. He expressed it this way, “of your own selves shall men arise” (vs 30). They weren’t strangers.  They would speak “perverse things”. Their motives “to draw away disciples after them.” In other words, taking other pastor’s members to form their own churches.

But to the disciples that follow them, their speech never sounds perverse.  It always seems to make sense and given that Paul was referring here to believers, the speech would likely seem scriptural.

We need to be careful NOT to find ourselves listening to and following those with all the characteristics of Judas the traitor.

Accommodating acts of betrayal, encouraging or slighting it, is often part of the process that prepares people to eventually be betrayers and bring others over whom they have influence to be a part of the treachery. Often unknowingly, by our words and deeds we influence our children and grandchildren down the same path.

May we always be mindful of these scriptures: “For if we sin wilfully after that we have received the knowledge of the truth, there remaineth no more sacrifice for sins” (Hebrews 10:26)

“Many will say to me in that day, Lord, Lord, have we not prophesied in thy name? and in thy name have cast out devils? and in thy name done many wonderful works? And then will I profess unto them, I never knew you: depart from me, ye that work iniquity.” (Matthew 7:22,23)