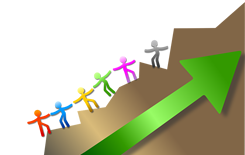 Leadership is about vision.  Proverbs 29:18 says, “Where there is no vision, the people perish…”

Vision is about direction and destiny.  Leaders sell their visions to those who wish to follow them.  Followers are those who have bought into the vision as espoused by the leader.  The exception are those persons who live under dictatorships and are without a choice.

The Lord Jesus was a leader.  He boldly told men, “Follow me” (Matthew 4:19) He told them what the outcome would be if they would follow His Vision – “I will make you fishers of men”.  Inherent in that promise, is that they too would be leading others.  He would make them leaders.

The Lord taught and prepared His disciples over 3 and a half years for the leadership roles they were to fill after His departure.  He taught by words and by His example.  He also drew reference to the leadership of men to which they were exposed, even in showing what they should avoid.  In one such example, the Lord referred to the leadership of the Pharisees. “Let them alone: they be blind leaders of the blind. And if the blind lead the blind, both shall fall into the ditch.” (Matthew 15:14)

If God calls men to be leaders, it is expected that there should be a certain approach and attitude that God expects from those whom He has called to follow.  If the leader is to fulfill the vision he/she must have the willing cooperation and subordination of those following.  Leaders, however, come with both strengths and weaknesses.  Those two elements can at any time be in operation.  As much as humility to following the vision is necessary on the part of the followers, the question needs to be asked as to when followers should abandon the leader for their own safety.

In the Lord’s reference to the Pharisees as “blind leaders of the blind”, we can see the following: Leaders can be blinded. Leaders can lose vision and yet continue to lead.  The followers are expected to have sight. In other words, the proper way to pursue a vision is with my eyes wide open.  I need to be seeing and monitoring where I am going.  I ought to always be aware of the direction in which I am being led. In reality, I am always to be assessing the direction in which I am being led.

According to the Lord, if the leader loses or lacks vision and the follower is also without vision, both shall end up in a ditch.  It is clear that God does not expect people to follow blindly.  It suggests, that the follower has a right to understand the direction in which he/she is being led. It would therefore imply, that the leader owes those who are being led, clarity as to the vision and the direction in which he/she is moving.

There is no doubt, that this type of leadership as shown by the Lord, serves both the interests of the leader and those being led. The open eyes of the followers, serve as a check and balance to the leader.  A leader who wishes to do well should welcome the checks. It also points to the need of those following to take responsibility for where they are being led.

This writing is not supportive of persons with malicious intent towards leadership.  It does not lend support to persons that are bent on looking for faults in leaders.  It supports those who recognize the need to support leadership, those who want to contribute to the success of those leading them but who also recognize the God-given responsibility to be always alert and vigilant.

Leaders therefore must possess the humility that will permit scrutiny of the vision “and be ready always to give an answer to every man that asketh you a reason of the hope that is in you with meekness and fear.” (1 Peter 3:15)

There is no room for interpreting the need to know of a follower as insubordination or a threat to leadership. On the other hand, providing clarity as it becomes necessary is not a favor done to the followers but the meeting of a need to which they are entitled.

There are scriptures that warn against the tendency of men to lead after the manner of the leadership of this world. As the disciples argued among themselves as to who would be the greatest, they were selfishly considering leadership.  The Lord intervened, saying that the leaders of the Gentiles exercise lordship and authority over the followers. He added, “But ye shall not be so”. (Luke 22:26) The Lord was saying that that should not be our style of leadership.  That is not the kind of leadership that He has called us to.  Instead “he that is greatest among you, let him be as the younger; and he that is chief, as he that doth serve.” Leadership is about serving those you lead. The Lord calls that being great as a leader and drew reference to His own example, saying, “but I am among you as He that serveth.” (Luke 22:27)

Peter, when he became a leader and was writing to other leaders, told them, “Neither as being lords over God’s heritage, but being ensamples to the flock.” (1 Peter 5:3) This is in no way to suggest that leaders are not to exercise authority and make decisions but leadership is by examples.  I cannot serve as an example, if I am not examined or understood.

History is filled with examples of leadership that failed those who followed, with disastrous consequences. Gamaliel, a respected leader in his day, exhorted the leadership of Israel as to how they should deal with leadership that God had established but before which, they felt threatened. Gamaliel referred to two leaders of which they likely were aware, Theudas and one Judas of Galilee. Those men he said, attracted a number of followers who were scattered when they fell.  Concerning Theudas, he said, “as many as obeyed him, were scattered, and brought to nought.” (Acts 5:34-39)

In modern times, there are leaders who began well but at some point, fell into error. Even after their death, they retained faithful followers who persist in the error which were taught to them.  The result have been cults. Clearly in those cases, their disciples went blindly, even to the point of bringing a threat to their own salvation or well-being.

It is clear that God has given no man absolute authority over others. Believers are to prove all things and hold fast to that which, after examination, is proven to be good. (1 Thessalonians 5:21) That is especially significant, in the days approaching the Coming of the Lord, when it is expected that many misleaders will arise or where Satan will seek to mislead many using men.

Leaders will do well to follows Paul’s example of ensuring transparency before men.  He stated it this way, “But have renounced the hidden things of dishonesty, not walking in craftiness, nor handling the word of God deceitfully; but by manifestation of the truth commending ourselves to every man's conscience in the sight of God.”(2 Corinthians 4:2)

Note the words, “commending ourselves to every man’s conscience” another way of saying, “opening myself to the examination of men, being transparent before all”.